Hong Kong’s National People’s Congress (NPC) representative Chan Man-Ki announced on May 18 that she would submit four delegates’ proposals at the session, covering such areas as anti-epidemic laws and measures, national security and the legal construction of Greater Bay Area.

Regarding the improvement of the emergency cooperation mechanism for public health emergencies in Guangdong, Hong Kong, and Macao, Chan suggested the establishment of a public health prevention and control base in the Greater Bay Area, a permanent isolation zone, which could be located in remote areas of Guangdong Province.

Setting up an expert panel on epidemic prevention, as well as the unification of the epidemic emergency level standards, are conducive to a better-coordinated response to the epidemic in the Greater Bay Area.

Regarding the implementation of laws to safeguard national security in Hong Kong, Chan Man-Ki submitted a proposal that the central government could consider enacting a national law. This law can protect national security in the Hong Kong Special Administrative Region by Article 18 of the Basic Law, which would be listed in Annex III of the Basic Law and implemented directly in Hong Kong. 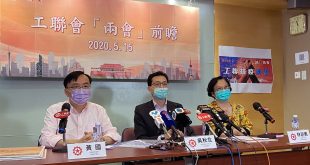