In mid-April, the Foreign Affairs Office of the Guangdong Provincial Government issued a statement entitled “We are in the same boat, fighting the epidemic together, build a community of common health for mankind. “

The statement pointed out that Guangdong Province treats Chinese citizens and foreign nationals in Guangdong equally and all overseas Chinese in all countries equally. People should cooperate with governments and relevant departments to implement anti-epidemic measures. In the epidemic prevention work, we oppose any differentiated approach aimed at specific groups and have zero tolerance for discriminatory words indeed.

The statement said Guangdong is a province with a high degree of opening to the outside world, provides a beautiful home for Chinese and foreign people to live in harmony. Since the outbreak of the COVID-19 epidemic, through unremitting efforts, the province’s epidemic prevention and control have continuously expanded to a good trend.

“Foreigners’ religious beliefs and customs must be respected. Foreigners will not be discriminated against when they enter local residential areas, communities, shopping centers, hospitals, restaurants, or scenic spots and enjoy local public transportation facilities,” said Zhang.

The provincial government has asked relevant departments, organizations, and groups to open special hotlines, allowing locals and foreigners to complain and report 24 hours a day. 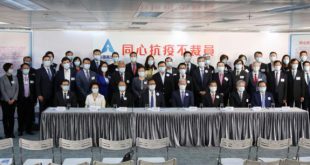