After an unprecedented display of national unity, resolve and courage, China has essentially expelled COVID-19 from its territory. But the virus has traveled worldwide, invading other nations and wreaking extensive havoc. Given its leaders’ denial of the danger and its unpreparedness to deal with a major outbreak, the United States looks especially vulnerable, a disaster in waiting.

Just at this moment, Russia has detonated a nuclear weapon (tactical, if not strategic) in the global financial markets. Its refusal to cut oil production, in defiance of US and Saudi Arabian pressure, has devastated asset prices everywhere.

Like a chess grandmaster, Russian President Vladimir Putin has long put up with assaults from the America Empire, waiting for the right moment to strike back and inflict maximum damage. He has just done so, leaving Washington and its allies/vassals reeling from the shock.

Astute analysts have long speculated that the end of the US Empire might come not through war or politics, but some cataclysm in the financial markets. Is that watershed process now under way? With a plague, unrepayable and still-growing debt, a fragile and inflated economy, financial implosion, severe imperial overstretch and too-obvious government incompetence, is the American Empire facing the perfect storm?

Like Russia, China has been putting up with relentless US hostility and persecution. Will Beijing, like Moscow, seize the moment to force payback time, especially on core Chinese interests?

Global instability is always a big concern for the Communist Party of China, so it will act cautiously. But along with the danger is a rare opportunity to downsize the US imperium and cut its capacity to continue preying in the world.

Success in doing so would benefit not only China, Russia and other nations that Washington considers its enemies. It would also lead to a more stable, prosperous and peaceful world, one driven by win-win cooperation instead of zero-sum competition and conflict.

We live in interesting times, indeed. 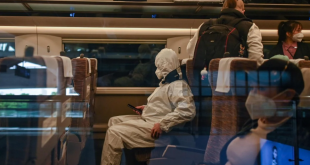